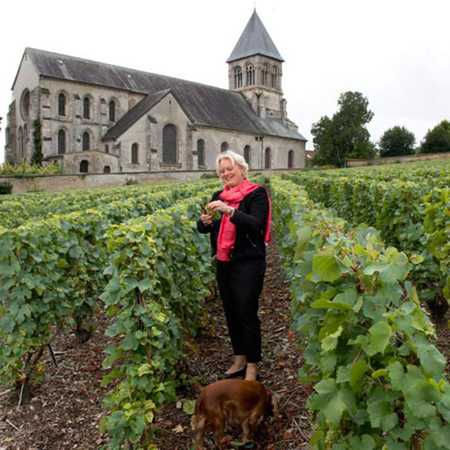 Maison Claude Cazals is in the legendary Grand Cru town of Le Mesnil-sur-Oger and is one of the very few estates in Champagne to have a ‘clos’ (or walled vineyard). It is very particular due to its exposure and geological makeup, and was enclosed by stone walls many years ago to create a kind of micro-climate.  Insecticides are not and have never been used.  Elegant, balanced, dense, mineral-rich and ripe Champagnes are crafted. (Bollinger and Deutz purchase grapes from the estate).

The vineyards extend over 9 hectares - split between the two Côte des Blancs Grand Crus of Oger and Le Mesnil-sur-Oger, two of the most highly rated villages in Champagne. 3.7 hectares were walled in by Olivier – Delphine’s grandfather – when he planted the vines in 1947. The walls also enclose a residence that once belonged to Leon Bourgeois, the 1920 Nobel Peace Prize laureate and French Prime Minister at the end of the 19th century. It was built on top of the original 10-meter-deep cave where today the most of the best cuvées are aged.  A mechanised conveyor belt invented by Claude to transport bottles up and down from the cellars is still in operation!

Cazals is a southern name from Herault, but the family has been in Champagne since Ernest Cazals, a cooper, came to deliver barrels in 1897 and decided to move to Le Mesnil-sur-Oger. His grandson Claude established the Maison and is credited for the invention of the ‘gyropalette’, a mechanical instrument used to speed up the remuage period. After his death in 1996, his daughter Delphine took over the family business which today includes nine hectares of vineyards, all within Grand Cru and Premier Cru areas.