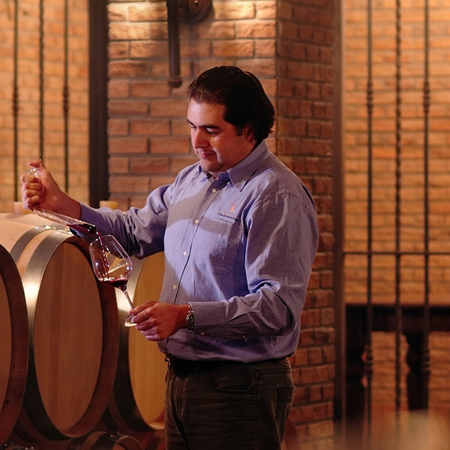 Viña El Principal is situated in Pirque; in the foothills of the Andes.  The winds from the mountains regulate the maximum temperatures during the day and lower them considerably at night, producing a thermic oscillation which can reach up to 20º C in summertime.

With the advice of oenologist Patrick Leon (technical director at Chateau Mouton Rothschild) and winemaking expertise of Gonzalo Guzman, harvesting is carried out entirely by hand, with controlled production and the sorting of clusters both in the field and later in the cellar. This is followed by a careful traditional Bordeaux vinification process and ageing in French oak.

‘Calicanto’ promotes the strength and beauty which Carmenere is capable (the harvest is carried out as late as June to achieve optimal ripeness in each grape).  Under the Memorias and El Principal labels, Cabernet dominates and more oak aging is conducted, lending  richer texture and complexity.

The estate was founded in the early nineties by Jean-Paul Valette, former owner of Chateau Pavie in Saint Émilion.  The objective? To produce top-quality red wines in this tiny, rugged corner of the Maipo in the French tradition.

Fifty-four hectares of the property were selected and planted with high-density plots of Cabernet Sauvignon, Merlot, Carmenere, Cabernet Franc and Petit Verdot.